(An oldie but a goodie by my good friend and guest contributor HH Andrewson, aka “The Hateful Christian”)

Stop me if you’ve heard this one.

A man goes to his neighbor’s barn, hangs out with pigs, gets drunk and…

A man from Millersville PA was charged with trespassing, public drunkenness and indecent exposure when he was caught drunk and naked hanging out with a bunch of pigs in his neighbor’s barn. “I just like pigs”, he confessed. Wow, what a refreshingly honest statement!

He also charmed readers by admitting that he was drunk on “Hamm’s” beer when he was caught. Good one! Do I detect a publicity stunt out of Hamm’s Brewery behind this scandal? Otherwise, why is the event newsworthy?

There are literally hundreds of people charged every day with trespassing, public drunkenness and indecent exposure. Why is this guy being singled out? Was it for his choice of drinking buddies or perhaps his clothing style? Oh right, he was naked.

I can’t seem to go a day without seeing another trending article from social media about somebody being naked in public. What makes this case so different? Is this man more physically attractive or unattractive than the other jaybirds? Does he have an interesting birthmark? What makes him stand out? 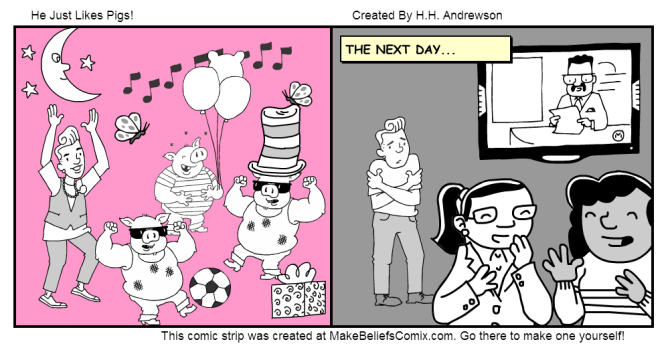 Is the spotlight on this man simply to lampoon him? Surely there are more interesting—if not controversial—things going on right now in the USA that are “newsworthy”. But maybe that’s the point. The prince of the power of the air[waves] is having his way again.

If one story gets too much attention, then more people are likely to invest in it. And if that happens, maybe people will start actually thinking about things before doing them. People will start noticing that ideas have consequences. Consequently, we are fed quick chuckle diversions like this one to keep us numb to what is happening to the world around us.

A man goes to his neighbor’s barn, hangs out with pigs, gets drunk and…

Truly shocking, say I! I mean if this man had been truly decent, he would have taken his pig friends to a classier joint than their own crib! Could it be that he was worried about what people might think if they took their party public? I wonder why.

What is it about this man that deserves our judgment? Did anybody bother to check on the pigs? Did they seem happy? If we could interview them about them having a few drinks with their human friend, what would they say?

View all posts by Healed by Wounds

One thought on “Duh, He Just Likes Pigs!”